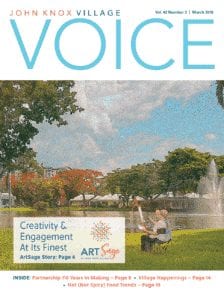 Some 50 years ago, Dr. Mack R. Douglas, a minister from Margate, gathered a few friends and proposed to develop a retirement community for senior citizens. The plan called for the construction of a group of cottages to be leased to a senior individual or couple for the balance of their lives. The community was formed and opened in Pompano Beach. That community, John Knox Village, would grow to become home to more than 900 residents. Since September 2017, JKV has been celebrating its 50th Anniversary with a year-long series of festivities and March is no different. For the second year in a row, residents can take part in ArtSage 2018. Fashioned after the Spoleto Festival in Charleston, SC from March 11 through March 17, ArtSage will provide a week of performances, art, lectures, demonstrations and dance. It will culminate on St. Patty’s Day with a gala campus-wide event named “50th Anniversary Cars, Crafts and Community Village Jubilee Celebration.”