Proof Positive There Is Always Time To Fall In Love

Love is not limited by time. For some John Knox Village residents, formerly single due to the passing of a spouse, there is a new life in love regardless of age.

Everyone enjoys a good love story particularly around Valentine’s Day, so read along. 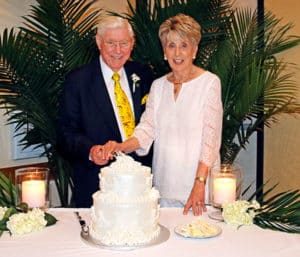 Marlene and Harry Durkin found each other through the commonality of their faith. College contemporaries, they shared a South Bend, IN connection: Harry at Notre Dame, Marlene at St. Mary’s. They did not know each other at the time, but would find each other decades later.

Marlene and Harry were widowed after long and loving marriages. Both independently moved as singles to JKV. They met through their Catholic faith, fell in love and married on March 5, 2016. The Durkins are now mom and dad of 10, grandma and grandpa of 15, with one great grandchild. 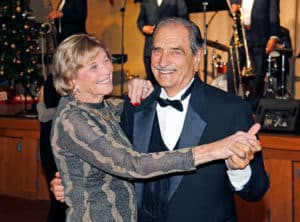 Phyllis and Norm Liedtke had a long-distance introduction powered first by snail mail, then by phone and emails.

A mutual friend told Norm about a wonderful lady named Phyllis, who might enjoy corresponding with him. A three-page letter went into the mail, and that was followed by regular long-distance phone calls and daily emails.

Norm and Phyllis finally met: He flew from Nevada to Ft. Lauderdale. From that day forward, they were nearly inseparable. Norm moved back to John Knox Village and they married in November 2011. And as Phyllis says, “The honeymoon has never ended.” 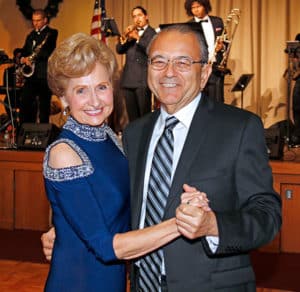 Jed and Sandy were sweethearts in Kansas City in 1976 but got married in 1999, 23 years later. Therein lies a true love story.

Jed was a computer expert for Control Data Corporation and happened to be installing equipment at the IRS office where Sandy worked. They met, they dated, and Jed made sure his travels always included Kansas City. However, after a year, Jed was reassigned to the Northeast. His career did not afford that same opportunity to visit with Sandy.

When a year passed, Jed found himself traveling again.  After much soul searching, Jed decided to rekindle his romance by surprising (no notification whatsoever) Sandy outside the Kansas City IRS office as she left work. Excitedly, Jed’s intention was to propose to Sandy on that visit.

He waited patiently but Sandy did not appear. Fortunately, he knew the name of a co-worker of Sandy’s. What a shock it was to find out from the coworker, that Sandy had left the day before to get married.

Jed wrote a letter to Sandy telling her she had been a very important person to him, and he wanted to wish her the very best in her new life. By the time Sandy received the note from Jed, she was married and living in Coffeyville, KS. She and her husband raised three wonderful boys. Unfortunately, her husband died tragically in 1998.

After a period of mourning, Sandy’s friends encouraged her to start dating. Lo and behold through the magic of the then-new Internet of 1999, the friends found Jed’s phone number. A call rekindled the relationship and the romance.

Jed and Sandy were married at John Knox Village in 1999, so Jed’s mother Marie (a resident of JKV), could attend.

In 2016, the Spragues joined the John Knox Village community as residents, where Marie is also still living at the spry young age of 107.