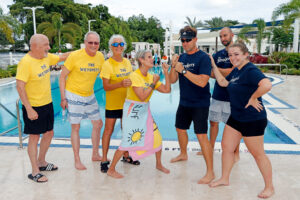 Through aggressive preventive measures—including on-campus testing along with vaccination and booster clinics—JKV has remained a virtual COVID “Cold Zone,” which has allowed for fun events including a recent Swim Challenge between residents and staff in the Village’s new Aquatic Complex lap pool; incidentally won by the residents.

To fracture a lyrical line from the Grateful Dead’s 1970 song Truckin’, “What a long, strange year it’s been.

Looking back at 2021, it was a hot medical mess with COVID-19 wreaking havoc around the planet

By comparison, John Knox Village was, and remains, a relatively “Cold Zone” thanks to aggressive preventive protocols the Administration put in place.

Those measures included leveraging our considerable influence in the senior living industry and the greater community to be chosen as the first Life-Plan Retirement Community in Florida to receive COVID-19 vaccinations for our residents and staff.

Throughout the year, we held on-campus vaccination and testing clinics. By Aug. 1, all newly hired employees provided proof they were fully vaccinated, and by Oct. 1, all staff were vaccinated. Also in October, we held two convenient on-campus booster shot clinics.

While those efforts helped keep us cold, what was hot here at South Florida’s premier Life-Plan Retirement Community were pre-sales for our newest 146-apartment home neighborhood—Westlake—the largest, most ambitious project in JKV’s 54-year history.

With the smashing of pre-sales goals by mid-October— that were to be met by the end of January 2022—construction began in November on the project’s two apartment towers— The Vue and The Terrace.

The Vue at Westlake will be 15 stories of light-filled rooms and enviable views with 1- and 2-bedroom floorplans, ranging from 1,231 to 2,259 square feet in size

The Terrace is an 11-story boutique-style tower with a stunning rooftop terrace for residents and guests alike to enjoy. Floor Plans at The Terrace offer two bedrooms measuring up to 1,845 square feet in size.

That said, many beautiful Westlake, as well as other apartment and villa homes, remain available. 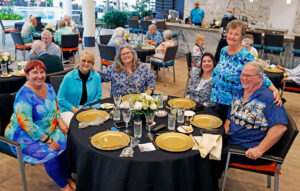 JKV residents Kay and Bill Spiker (right) celebrated their 50th Wedding Anniversary with family and friends at Stryker’s Poolside Sports Pub. Stryker’s has become the go-to venue for parties and gatherings at JKV.

Aquatic Complex Now Open
Our Plant Operations team had a busy year, with among other projects opening the campus’ crown jewel, our Aquatic Complex.

The Aquatic Complex quickly became the main gathering space for all with camaraderie and companionship on display aplenty.

Residents and staff alike, who have visited resorts domestically and internationally, repeatedly say the JKV Aquatic Complex rivals any 5-star resort at which they have ever stayed.

Cassels Tower, our 17-story apartment building with its west-facing wall clock that can be seen by I-95 motorists, received a complete exterior re-do. A new roof and air-conditioning system were installed. All apartments now have impact windows and sliding glass doors, and the exterior was waterproofed and repainted.

The exterior of our 10-story Village Towers building received the same treatment. A new roof was being installed as The Gazette was going to press.

The Pavilion Opens Grandly Early In ‘22

It has, indeed, been a long, strange BUT MOSTLY FUN year at JKV.

To learn more about the exciting things taking place at John Knox Village call (954) 871-2655 or visit www.johnknoxvillage.com, or additionally www.JKVgrows.com.