Westlake Filling Fast: It’s a Good Problem to Have! 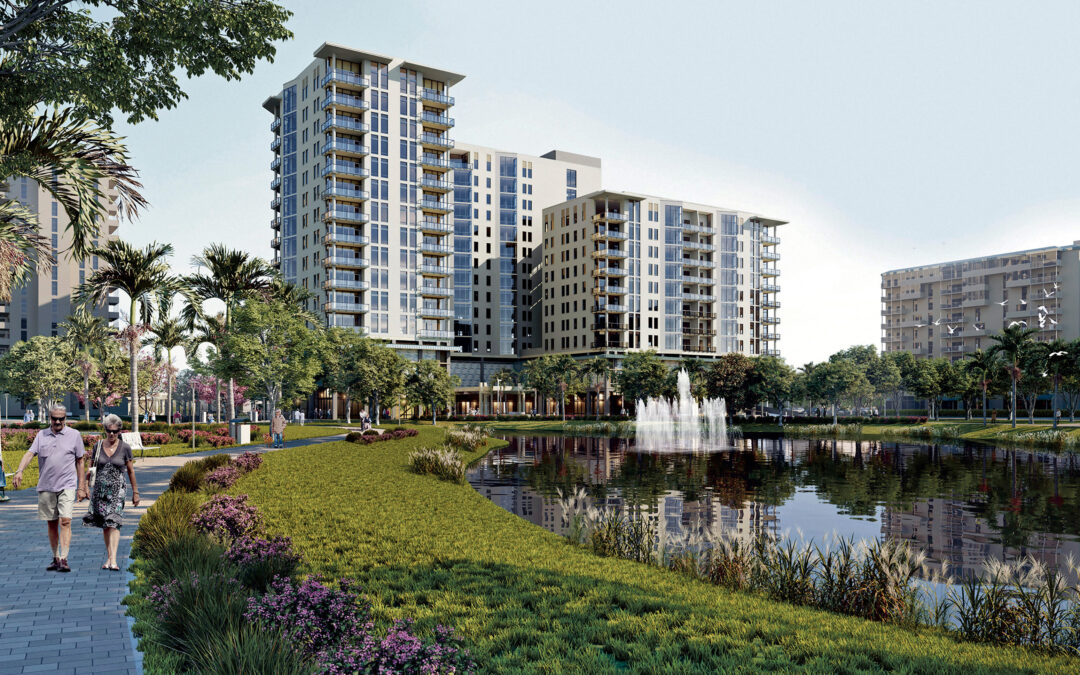 Construction on The Vue and The Terrace apartment buildings at Westlake will begin soon.

The John Knox Village Sales Team is smashing all of its pre-sales goals for the Village’s most ambitious project in its 54-year history—the 146-apartment neighborhood called Westlake.

Westlake is part of a multi-phase $100-plus million expansion project to the Village’s 70-acre campus and will include state-of-the-art, designer-finished apartment homes in the two new towers—the Vue and the Terrace.

Director of Sales Kim Ali and her team were given a 10-percent deposit goal of 90 apartments to achieve by Aug. 31st. How did they respond? The team pre-sold their 91st apartment on July 27th.

They have a 105-apartment goal by Oct. 31st and as The Gazette was going to press (Sept. 13), Ali predicted the team would hit that mark by the end of September or early October.

“The excitement—really, the buzz—around Westlake from the greater community is palpable,” Ali told The Gazette. “Between strategic advertising and messaging in The Gazette and elsewhere, along with our COVID-careful small, intimate on-campus educational events, the response to the Westlake project has been phenomenal.

“I would say other reasons for this frenzy come from our current residents providing referrals on behalf of their friends and curiosity from people in the area. John Knox Village has a great reputation as a provider of resort-style living, along with unlimited health care should our residents ever need it, and outside people want to see what we are all about.”

The other part of the “good problem” is that while 100-plus apartments have been accounted for, there are still plenty of great apartments available, but conventional thinking is to check out Westlake sooner, rather than later. Ali shared that many new residents say, “better now versus five years too late.”

Two New Towers: The Vue And The Terrace

When completed, The Vue at Westlake will be 15 stories of light-filled rooms and enviable views with 1- and 2-bedroom floorplans ranging from 1,231 to 2,259 square feet in size. The Terrace is an 11-story boutique-style tower with a stunning rooftop terrace for residents and guests alike to enjoy. Floor plans at The Terrace offer 2 bedrooms measuring up to 1,845 square feet in size.

The shared first floor of The Vue and The Terrace will be home to first-class amenities including, a high-tech projection theater, technology hub, business center, workspaces, art studio, a sacred space, library, The French Press Bakery, a coffee and wine bar and the Westlake Eatery. There will be two floors of covered parking as part of Westlake, as well.

Adjacent to the two apartment buildings will be the Westlake Pavilion, which is on schedule to open in the First Quarter of 2022, and will feature:

When the Pavilion opens, The Pearl and The Seaglass will be replacing the current Patio and Lakeside dining rooms, which will be razed to enlarge and enhance JKV’s current lake system. When the dredging is complete and the water flows throughout, residents and visitors will have water views from more than half of the campus.

One misperception prospective residents have about moving into a Village apartment or villa home is that this is a real estate transaction. JKV is a Life-Plan Community, which means that all residents who move here receive a Life-Care contract which secures their care, whatever future health care circumstances may arise, in addition to which they enjoy the use of an apartment or villa their entire time as an independent living resident.

Every resident has the peace of mind that their future health care needs will be met. That continuum of care includes assisted living and skilled nursing should those needs be necessary—all of which takes place directly on campus. With a fully refundable 10-percent deposit, Gazette readers are automatically enrolled as Platinum Level members of the Westlake Village Club, with perks that include 12 dinners and eight lunches at any of the three on-campus dining venues.