Top of the Podium at 85: JKV Resident Oldest Triathlete to Finish 16.3 Mile Race 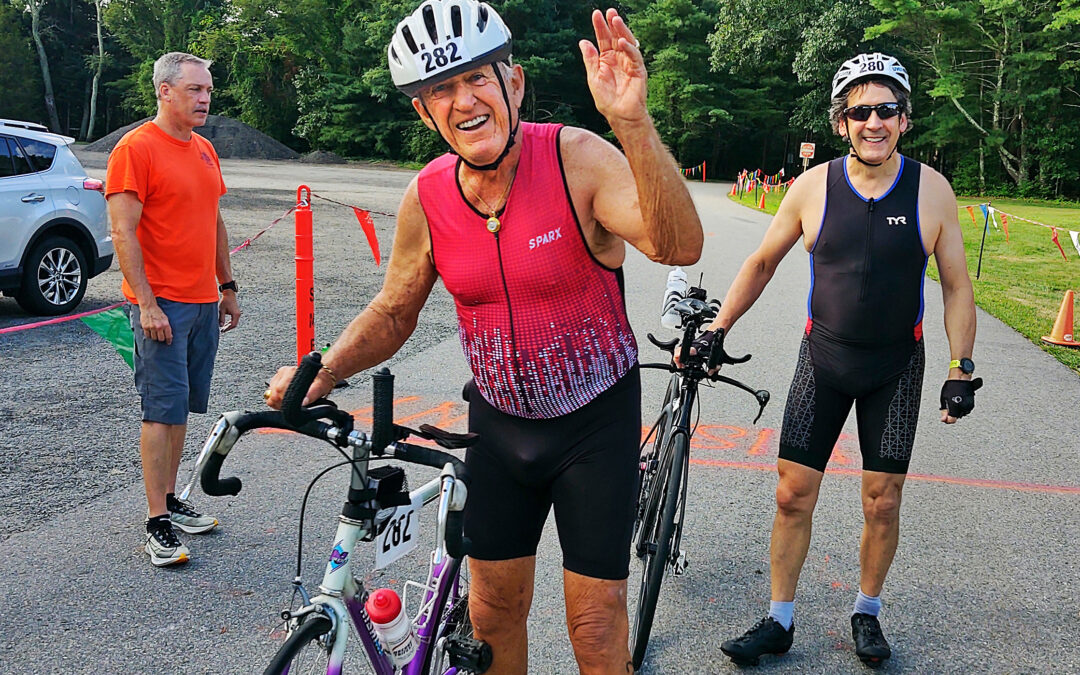 Paul Loree gets off the bike followed by his son Howard during the Cranberry Triathlon in Lakeville, MA.

In our last story about Dr. Paul Loree, a Heritage Tower resident, in June 2021, he was gearing his sites on the Aug. 21, Cranberry Triathlon in Lakeville, MA. Let’s see how that odyssey turned out!

Paul upped his training in the last weeks before the triathlon, swimming 30 laps in the 25-yard pool at JKV, riding his bike throughout the campus daily and an 18- mile ride on Saturdays from JKV to the Pompano Beach Golf Course where he did laps around the bike trail, and regular three-mile plus race-walks on Tuesday, Thursday and Saturday with fellow JKV resident Tom McDowell. Paul was fit and ready to take on the Cranberry Triathlon challenge.

In The Grips Of Hurricane Henri

It’s tough enough for an 85-year-old triathlete from Pompano Beach, FL to fly up to Massachusetts to participate in the 1/2-mile swim, 12.7-mile bike and 3.1- mile run, but Paul weathered it all under the threat of Hurricane Henri, which would make landfall the very next day in the neighboring state of Rhode Island.

Fortunately for Paul’s triathlon plans, his sprint triathlon set for Saturday would go on. He lined up ready to go alongside his son Howard, who would be his “angel” to partner with Paul every swim stroke, bike pedal, and stride along the route. The Olympic-length triathlon on Sunday that Howard was also going to compete would be cancelled due to Henri.

“I was entered into the 85 to 89-year-old division,” Paul said. “I was pretty confident that being the youngest in the age group would be an advantage,” Paul said with a chuckle. “Considering I was the only one in that age group, I was neither intimidated nor elated.”

Triathlons generally attract hundreds of entrants, and the Cranberry Triathlon was no different. Since race organizers do not want every entrant to start at the same time (makes for a very troublesome start in the swim part of the race), groups are generally sent off in waves according to sex and age group. Paul and his “angel” son were among the last triathletes to enter the water.

The half-mile swim around a small lake was accomplished in 39:20. Then on to the bike for the next leg of the triathlon.

The bike Paul used was a loaner from his son. They had adjusted the bike on Thursday night, to make it a proper fit for Paul. He said as they rode along side-by-side, Paul and Howard chatted and caught up on the latest family news. “Howard kept me motivated by telling me, ‘You are doing great. It’s all downhill from here.’”

Paul said Howard was not kidding, compared to the table-flat topography of his Florida training, the hills of Eastern Massachusetts were like mountains to him. But true to his goal, Paul continued pedaling, and finished the bike leg in 56:13. Then it was time to transition from the bike to the run.

Those “mountainous” hills did not let up as Paul observed, and due to his advanced knees and age, he and Howard race-walked the final 3.1 miles to finish the triathlon in 2:53:01.2.

Family Cheered Them On To The Finish

Paul’s daughter Ruth, granddaughter Sophie and Howard’s wife Ann positioned themselves along the race route to cheer on their conquering heroes.

Paul accomplished his goal: To finish the triathlon. While he scored first in his age group, Paul was not able to mount the podium for his awards, since finishing nearly 2 hours after the overall winner, the podium had long been disassembled. He was however, the oldest, as well as the person who traveled the furthest, to compete AND FINISH the 2021 Cranberry Triathlon.

While most of our readers probably will not start training for the next triathlon or marathon scheduled in their town, Paul’s accomplishments do emphasize the need to have purpose in life.

“You always have to work toward a goal, whatever that may be, whether it is athletic or intellectual,” Paul said. “I want to learn Spanish, so that is my next goal.” Does that linguistic goal mean Paul’s triathlon career is over?