Twenty Years Ago: 9/11 Remembered by JKV Residents and Staff 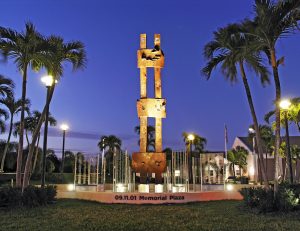 There are some 700 recorded 9/11 memorials in the U.S. Remnants of the World Trade Center towers, typically steel girders, have been incorporated into many of the memorials. Some 1,100 pieces had been made available for that purpose. Pictured above is the 9/11 Memorial located at Fire Station 3 in Palm Beach Gardens, FL. Marty Lee photo.

I remember the time, place and what I was doing that morning. I was watching the “Today” show on NBC, and out of the corner of my eye, I saw the video of a plane hitting the World Trade Center. I thought to myself, they must be playing a trailer for an upcoming thriller movie. But no, the voices coming from the “Today” show were sounds of disbelief and horror.

9/11 occurred just one month before I started working with John Knox Village in October 2001. Living in South Florida, I watched it live from more than 1,000 miles away. However, many folks living or working at JKV today were in New York City 20 years ago. On that day, at that time, they saw firsthand another “day that will live in infamy.”

Dr. Paul Rosen and his wife Sue were living in NYC on the 29th floor of an apartment building at 72nd Street and York Avenue (across the street from Sotheby’s). “We had a direct view toward the World Trade Center,” Dr. Rosen said.

“I was in my office at New York-Presbyterian Hospital and Sue was at home. Shortly after the first plane hit a tower, someone walked into my office to tell me that a tower of the World Trade Center had been impacted by an airplane. I am old enough to have been living in New York City when the Empire State building was hit by a plane, so my first reaction was that this was another similar tragedy. When the second tower was hit, the reality of what might have happened set in. From our apartment we could see a large grey cloud where the World Trade Center had stood.”

For many, the shock of seeing what was happening, connected with thoughts of those trapped inside the Twin Towers. Village Towers apartment resident Donald Patriss was living in Manhattan on West 60th Street. He was relaxing at home on his day off from teaching at Mount St. Vincent College in the Bronx.

“When I heard the news, I turned on the TV and saw one of the Towers fall,” Donald said. “Soon people were fleeing the area of Downtown Manhattan. The people were covered in ash.

“I had former students who worked on the top floor and never made it down. One was on the phone to his wife who was pregnant, and he knew he wouldn’t make it but left a message for his unborn child. Years later I heard that message and wept.

“Before I left Manhattan to move to Florida, I went to the 9/11 Museum downtown, but after a few minutes inside, I left as the memories of that time in New York City streamed back and I was once again crying.”

Concerns For Family And Lost Friends

JKV’s Administrative Assistant of Plant Operations, Elizabeth Talatinian recalls that day and the tragedy of people close to her. “My older brother was supposed to be in the north tower that day,” Elizabeth told The Gazette. “He was working with Hewlett-Packard at the time, and his installation team went to do an install of a computer system.”

“My brother’s boss kept him back one day to finish up something at the office. He was okay, but he lost his whole team.”

Another current Cassels Tower resident Chris Aubanel was living on 17th Street in New York City, when he learned that a plane had hit the first tower.

“I remembered the guided tour [Chris had taken] of the tower observation deck two weeks before. It was explained that the towers had been designed to withstand the direct hit of a Boeing 707 taking off from Kennedy Airport, that might lose control and hit one of the towers,” Chris said.

Preparing For The Casualties

“When the towers collapsed – a few hours later as I remember well – the hospital on 12th Street, St. Vincent Hospital, was expecting hundreds of casualties and put hundreds of beds along the streets around the hospital to accommodate the wounded. However, none came. All the people in and around the towers were either killed outright or ended up walking home.”

“We were in Shanksville, a month after the attack,” Joyce said. “We could see the big hole from the bridge, but nothing left of the plane – Flight 93. Next to it, in a field, Shanksville had put up crosses for everyone who was lost. People left memorabilia: Hats, shoes…personal items by the crosses. It gave family and friends an emotional attachment with those lost. It was a very moving site.”

According to Britannica.com, “Some 2,750 people were killed in New York, 184 at the Pentagon, and 40 in Pennsylvania (where one of the hijacked planes crashed after the passengers attempted to retake the plane); all 19 terrorists died.

“Police and fire departments in New York were especially hard hit. Hundreds had rushed to the scene of the attacks, and more than 400 police officers and firefighters were killed.”

No Matter How Painful – We Remember 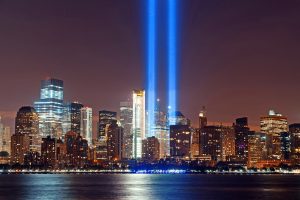 On Sept. 11 of this year, the skies above Manhattan will again be lit in memory of the 20th Anniversary of the World Trade Towers tragedy.

In all of our lives, there are those pivotal and consequential moments that we remember vividly even decades later. For some of The Gazette’s older readers, it might be the Pearl Harbor attack or D-Day. For those of us who grew up in the ‘60s, it might be the assassinations of President John F. Kennedy, Civil Rights leader Martin Luther King Jr. or Senator Robert F. Kennedy. For everyone reading The Gazette, the tragedy of 9/11 is indelibly imprinted on our memories. We recollect exactly where we were, who we were with, and what we were doing as the day’s events unfolded, even 20 years later.

An entire generation of young people have come into this world since 9/11. While we, the parents and grandparents remember well the events of that day, let us share our wisdom with our children and grandchildren. Let us resolve to do our best to prevent another 9/11. We are but one humanity, all connected to each other, living on one planet: Earth.