John Knox Village of Florida, Inc. was selected to collaborate with The Virtual Human Interaction Lab at Stanford University, the pioneering lab focused on the psychological and behavioral effects of virtual reality, and MyndVR, the leading provider of VR solutions for older adults. The study will examine how older adults’ use of VR affects their psychological well-being and their attitudes toward new technologies. 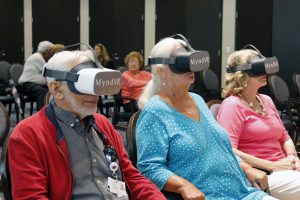 Residents who have started participating in the study were Anne Selby, Terry Colli, Mark Levey and Hugh Root. Reporters from the Associated Press, South Florida Sun-Sentinel and more, were eager to interview them, as well as other residents who attended the press conference.

Researchers at Stanford’s VHIL have been building immersive VR content and testing its effects on people for nearly two decades. Members of the Lab have published hundreds of scientific articles detailing the psychological and behavioral impacts of VR experiences. The Lab’s founding director, Jeremy Bailenson, is considered one of the world’s leading experts on the topic.

“Virtual Reality adoption has been growing significantly, and we’re interested in both the immediate and lasting benefits it can provide,” said Bailenson. “Working with MyndVR gives us access to a crucial population of older adults that were hit particularly hard by the isolation of the past year.”

“Our goal since day one has always been to improve the quality of life for older adults,” Brickler, of MyndVR told The Gazette. “We are excited to be part of this study with such a prestigious team at Stanford and to provide this opportunity to the senior living communities within our network.”

MyndVR has brought together a powerful consortium of industry collaborators to support this research, including AT&T and some of the world’s most innovative senior living communities. By combining the MyndVR platform with AT&T 5G technology, the resident experience is further enhanced.

“We are honored and thrilled to be one of the first senior communities to participate in the Virtual Human Interaction Lab at Stanford University with MyndVR, with whom we’ve experienced tremendous success with our residents for the past two years,” stated McAfee.

By participating in this research, communities and health care providers will help conduct one of the largest-scale studies to date of how VR affects this vitally important population and the role that technology could play in their overall health and wellness.