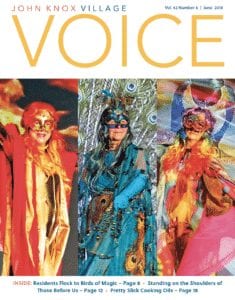 In a two-night show that focused attention on the John Knox Village signature bird population, “Birds of Magic, Myth and Mystery” was an entertainment delight for residents and guests alike.

The show was a fundraising effort by the Rotary Club of John Knox Village with all proceeds to benefit the Foundation’s “Wings On The Water Fund.”

As writer, producer and director, Heritage Tower resident Margo Lewis was the driving force behind the show. She credited the many residents and Village staff, who contributed in significant ways to a successful production that was all about the birds of John Knox Village, and the myth and mystery of the avian world in general. The variety show was presented in three parts.