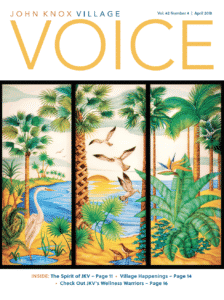 Our John Knox Village Chapel has a lot of interesting history and I will relate what I know of its past. The first Village Chapel service was held in 1973 on the first floor of Cassels Tower, where the PNC Bank now resides.

It was noted that they met monthly. As many may know, the Village was first named Baptist Village, so I will assume that the first preacher, Rev. O. Guy Harris, was our first Baptist Chaplain. He served the Village from 1971 through 1976.

From 1977 to 1978 Rev. Roland Dutton served. He resigned in 1978 and was replaced by Rev. A. Lex Smith on a temporary basis. From 1979 to 1989 Rev. Latham T. Merchant served as Chaplain. During this time a new resident, Hilda Haynes, attending a Chapel service being held in the community room of Cassels Tower, made the suggestion that a fund be started by residents to build a new Village Chapel.